The internet is filled with questions about health and what's good or bad for you. We question everything from empty calories to saturated fat. Is organic food better than non-organic food? Is white bread terrible for us? These questions are the topic of countless blogs and ads online. The problem is the information isn't always accurate, or it's only half the truth.

Ask any personal trainer, nutritionist, or doctor, and they'll tell you these questions are the most common things anyone asks them about nutrition. Lately, diet drinks and camouflaged diet drinks, such as Coke Zero, are hot topics across health and fitness websites. The chemicals and sweeteners used to add flavor to diet drinks are questioned at every turn.

Diet Coke and Coke Zero sit at the front of most of these debates and remain surrounded by rumors and myths. Recent studies alleged that diet drinks increase your chance of stroke. New rumors circulate daily like diet drinks cause strokes or diet drinks really make you gain weight. Just like you, we wanted to find out which stories were fact and which ones were fiction.

We focused our research on Diet Coke and Coke Zero. Coke Zero is now known as Coke Zero Sugar. Both drinks have no calories and no sugar. If you look at the nutrition label on either beverage, the only thing they seem to have in them is a little sodium and the chemicals that make up the fluid part we drink. The real difference is the flavor. Coke Zero tastes more like regular Coke.

A Breakdown of Coke Zero Sugar 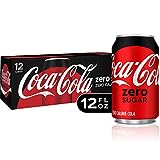 Coke Zero Sugar has no sugar in it. It tastes pretty close to what regular Coke tastes like without the carbs. You can get it in most of the same flavors as Coke like vanilla and cherry. It also comes in caffeine-free. As we mentioned, there’s no sugar in it. The sweetness comes from artificial sweeteners. The artificial sweeteners cause most of the concern people have about these types of drinks.

More concern pops up when we examine the nutrition label and the ingredients. The bulk of the components include phosphoric acid, potassium benzoate, caramel color, potassium citrate, and natural flavors. These ingredients don’t contribute to calories. They do add potassium and sodium in small amounts.

Coke Zero Sugar doesn't contribute much in the way electrolytes or other things considered nutritionally valuable. It contains about 34mg of caffeine per twelve ounces which is equivalent to roughly a quarter cup of coffee. The sweeteners in Coke Zero Sugar are artificial which we'll discuss further in the article.

A Breakdown of Diet Coke 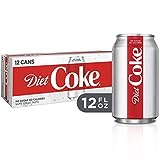 According to the label, Coke Zero Sugar and Diet Coke are almost the same drink. The real difference is the artificial sweeteners they use to provide most of their flavor. The sweetener used to give Diet Coke its sweetness is aspartame while Coke Zero Sugar uses a combination of aspartame and acesulfame K to achieve its Coke-like taste.

Are These Ingredients Bad for You?

This is where the debate breaks out over these two diet drinks. Most of the chemicals in the drinks are reasonably harmless to an extent. Recent studies around artificial sweeteners have raised some concerns about their effects on the human body. Most of the studies do not paint them in a good light, and people are starting to give up their diet drink habits.

Caramel color is made by heating up corn or cane sugar along with other carbohydrates until it turns into a dark brown syrup. That’s what gives dark colored soft drinks their color. It sounds innocent and harmless, but in reality, caramel color can lead to lung cancer. Long-term use exposes you to a toxin called 4-methylimidazole. That toxin is on California’s Proposition 65 list of carcinogens.

Phosphoric acid is what gives soft drinks like Diet Coke that little burn you feel when you drink them. It contains phosphorous which is good for us in moderation. Phosphorus is an essential mineral and a primary material used in building healthy bones. However, prolonged exposure to phosphoric acid is not the same as taking in phosphorus as a supplement.

Phosphoric is acid damages your teeth, even with limited exposure to the acid. It is an acid after all. About two sodas a day is all it takes to cause damage to your kidneys and cause urinary issues. Science has no proven phosphoric acid causes these problems, but it has shown that the acid causes changes in the urinary system that are known precursors to kidney disease.

It is tough to define what "natural flavors" actually means. According to Coca-Cola, natural flavors is a way to describe the fruit extracts, spices, and herbs that give sodas their unique flavors. Coupled with artificial sweeteners, natural flavors are how the taste of each drink is described. The precise blend or even an ingredient list is hard to nail down.

Aspartame is an artificial sweetener that's made by combining phenylalanine and aspartic acid. These two amino acids, along with some trace elements, add the dull, almost flat sweetness you taste when you drink a Diet Coke. According to Coca-Cola, aspartame is safe for humans, and the warning label on their products is for people that can't use aspartame once ingested.

Science lays out a few warnings for us involving the regular consumption of aspartame.

The problem is deciding who to believe because the studies vary in results. Most studies agree that constant, prolonged exposure to aspartame can raise your risk for certain cancers. It can also trick your body into gaining weight by fooling it into sending out insulin to deal with sugar even though you didn't drink sugar.

We went over aspartame pretty well in our ingredients breakdown above since it is included in Diet Coke and Coke Zero Sugar. We're still a little confused by the name Coke Zero Sugar since there is no sugar in it, but that's not important. The important thing here is figuring out if these artificial sweeteners will make you sick as many internet myths allege.

The short answer is probably not is you drink one or two drinks a day that contains aspartame.

If you drink twelve to fifteen drinks a day, you are damaging your kidneys and probably racing toward several other health issues. That said, there is no study that says yes, these artificial sweeteners are going to cause damage to your body.

What the studies do show are correlations between the changes the chemicals in the sweeteners cause in your body and some health issues. The health issues could be caused by artificial sweeteners include some types of cancer, diminished brain function, kidney disease, obesity, and damage to your digestive system.

Acesulfame potassium is rarely used as a sweetener on its own. Usually, it is combined with sucralose or used to reduce the bitter aftertaste often associated with aspartame.

They made Coke Zero Sugar taste like regular Coke by using aspartame and acesulfame potassium. As of this writing, most studies say this artificial sweetener is safe unless you start chugging a twelve pack of drinks each day.

The science breaks down once we look at recommended daily allowances for these two artificial sweeteners. The FDA recommends that you consume less than 50mg of aspartame per kilogram of body weight. There are 185mg, on average, of aspartame in each 12-ounce can of Diet Coke. You'll have to do the math based on your weight.

The FDA recommends that you take in less than 15mg of ACE-K per kilogram of body weight. The average, fit person could drink around 18 cans per day and probably be safe from any real damage, other than dozens of trips to the bathroom. However, long-term studies on ACE-K have not been completed as of this writing so that we may learn good or bad things about it later.

Will Artificial Sweeteners Cause Strokes or Alzheimer’s?

The truth, according to most studies, is we just don’t know. Some of the components that make up aspartame and ACE-K cause the brain to change after drinking a beverage that contains them. Whether or not these changes are harmful is widely debated. Studies suggest but do not confirm, that artificial sweeteners in large doses lead to hardening of the brain which is similar to Alzheimer’s.

The same things that cause the brain to harden in large doses are known to cause the blood vessels and arteries in your body to stiffen. This can lead to strokes or aneurysms. Keep in mind that this is only if you consume a dozen or more diet drinks a day. If you say under the FDA’s daily recommended levels, you should theoretically be ok.

Will Diet Coke or Coke Zero Sugar Make Me Fat?

There is a lot of controversy around this question. Again, the short-term studies we have now don't show a real correlation between artificial sweeteners and weight gain. Long-term studies on the topic do not exist. To understand why this debate even exists, you need to understand what causes most people to gain weight. Insulin is the real culprit behind most cases of obesity.

When you eat sweet things, your brain responds by sending insulin into your bloodstream to deal with the sugar. When insulin is in your blood, your fat cells are turned off.

They cannot release fat for the liver to metabolize and use for energy. If your body doesn't need the sweets for energy, it will store it in fat cells to be used later. So, you gain weight by eating these sweets.

The debate here is that artificial sweeteners cause your brain to react as though you have sugar in your bloodstream. Your brain is fooled into sending insulin out there to deal with the sweets. Since there are no sweets, your body doesn't have any extra fat to store, but your fat cells are turned off, so you cannot lose weight.

Since most diet drinks like Diet Coke and Coke Zero Sugar are aimed at people trying to lose weight, drinking them instead of water is probably hurting your weight loss goals. These diet drinks don’t necessarily cause you to gain weight, but they do slow down the weight loss process. You’re better off drinking water if you are dieting.

So, are artificial sweeteners like those in Diet Coke and Coke Zero Sugar bad for you? They probably won’t hurt you if you only drink a few each day and spread them out over the day. They will slow down weight loss if you’re trying to lose weight which contrasts with their advertised purpose. You’re better off drinking water, but one or two diet drinks a day is probably not going to do much damage.